About AV1 and how it works

The AV1 is placed in the classroom and the child is at home or hospital on their device. AV1 has a built-in camera and microphone to transmit the lesson back to the child. The integrated speaker allows the child to talk to their classmates.

The AV1 app is compatible with tablets and smartphones which support IOS (11.0 and newer) or Android (9.0 and newer). The AV1 app can be installed from both the App Store and Google Play.

From home, the child can control their AV1 and interact with the class.

This enables the child to take part in the lesson as though they were physically present. 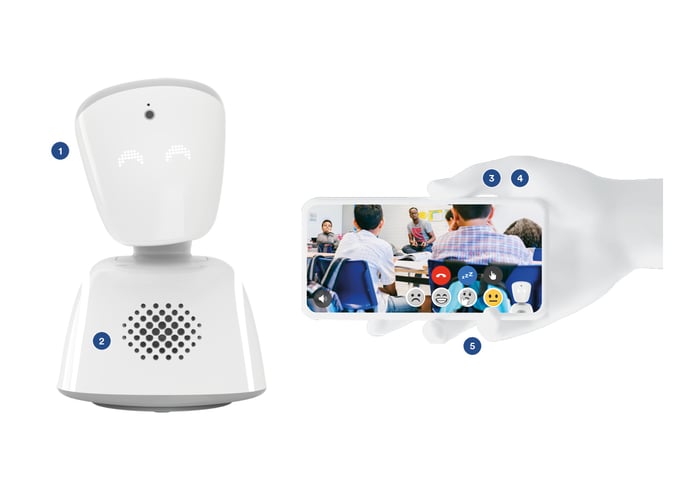 Bring AV1 wherever you want

The great thing about AV1 is that it can also be used outside the classroom too. It has an integrated 4G SIM card, meaning it can be taken out into the playground, on school trips, or even home for birthday parties!

The light strip on the 'shoulders' indicates the status of the robot:

AV1 is on and ready for use

The robot is searching for the network or reconnecting

The robot is working on fixing a problem/No internet connection

The robot is all out of battery and needs to be charged. It will take about 30 minutes of charging before you can use the AV1 for streaming.

The colours on the head signal:

The pupil raises their hand